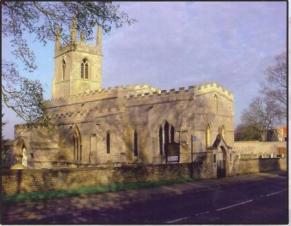 The Parish Church stands in what in Roman times was a protected zone between the ramparts and ditch on the N. and E. and the river on the S. and W. The church stands on the site of a Roman temple, on which an early Christian church was built; this was probably a wooden structure, but of it no trace remains.

The wooden structure was replaced by a Saxon church consisting of a small Chancel and an archless Nave. Saxon long and short work is still in evidence in the S.E. corner of the nave.

The Norman church consisted of a nave and two small aisles divided from the Nave by round, arched arcades resting on columns of stone with square bases. The nave was low with a flat wooden roof. The tower opened into the nave through a fine horseshoe arch. At the E. end was a wall pierced with a low round arch leading into a small oblong chancel, against the East end of which was the altar.

In the 13th Century an Early English chancel with lancet windows was built, while the round arch between the nave and chancel was raised to a point. Other changes followed: the aisles were lighted with windows with decorated tracery, and carried on their walls in rough distemper the story of the Incarnation. Above the Norman arcade was added a clerestory with decorated windows surmounted by an open roof of massive oak timbers. Across the chancel arch stretched a wooden loft carrying figures of Our Lord on the Cross with St Mary and St John on either side.

In the 15th century a clerestory was added. The font on a chamfered plinth may be late 12th/early 13th century.

The Reformation saw the destruction of many of the church's treasures.

In the 18th century the church was fitted with box pews of deal.

Considerable restoration work was carried out in the mid to late 20th century.

Details of all services in the group can be found below.

Due to the current situation with the Coronavirus (COVID-19) and the additional restrictions which have been imposed recently, we are unable to produce a full calendar for the forthcoming month.

However, Wednesday morning Celtic Prayers are now being held in church at 10.00am each week.

With regard to Sunday services and other events, please contact Rev'd Don to be included in the e-mails giving details and service sheets. For those without computers there are hard copies of service sheets available from the church porch each week.

Over the next two months we hope to be back to full speed on deliveries of the Newsletter, but we will also be sending it out electronically in the hope of ensuring that as many people as possible still receive a copy.

If you have received it by e-mail, please do forward it to anyone else you know who may not be on our list for distribution. It will be better that someone receive it twice than not at all. Thank you for your help with this. If you would like to receive our monthly newsletter by email on a regular basis, please let Rev'd Don know.